Rhythmic Pop'n
A Chibimon that can never be fully trusted, Yami is a character from the Chibi's Corner series that made an earlier appearance in an illustration for Creative Worlds. Yami mirrors Pichu in some ways, in that he is also incapable of keeping his instincts subdued at all times. Behind Yami's less than kosher smile lies a terrible demon of darkness; Yami is usually content with eating gemstones, but every now and then, he gets the craving for a soul. When Yami goes full feral, he does everything he can to deceive people into looking directly into his eyes, and once Yami and his victim's gaze lock, the victim's soul is immediately and most horribly sucked out of them, and right down Yami's mouth. After the consumption of a soul or three, though, Yami becomes satisfied and gains control of his better, logical senses again. Yami's victim count is also quite high, but not as high as Pichu's, as Yami is very unsubtle about trying to get people to look into his eyes, and usually tells the person directly to look at him in some way when he's in a feral state. Only the naive or uninitiated about Sableye fall for this.

Unlike Pichu, Yami feels no remorse for this behavior, and genuinely enjoys eating the souls of others. However, with those he has become close to, he tries his best to fight against himself, and honestly does not want to hurt them. However, his friends are smart enough to know when he goes into his feral state and just tend avoid him or lead him away from the group and out to claim the soul of some rando. The fact that Yami feels like he must always walk on eggshells among his friends does make him feel sad and a bit isolated. He wants to be good, but he loves being bad, which includes much less harmful things like playing tricks on people as well. This plants him somewhere in the range of chaotic neutral. When he's not trying to kill anyone, he can be fun to be around.

Yami's name is a truncation of Sableye's Japanese name, Yamirami. 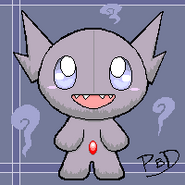 The very first art of Yami from 2005 on the Creative Worlds website
Add a photo to this gallery
Retrieved from "https://aquabunny.fandom.com/wiki/Yami?oldid=1056"
Community content is available under CC-BY-SA unless otherwise noted.