Blade Knight inc's Christmas Carol (as "Walter")
Wobbuffet is one of Blade Knight inc's Pokemon and comes from the Alternate Universe series. Although not a major character, he does appears with a high frequency after Bellsprout and Bulba, Blade Knight inc's other Pokemon. As he is wont to do, Wobbuffet usually pops into the scene with his species trademark "WOOOOBBBBUFFET", though sometimes he'll mix it up and throw out a "SOOOONAANS-A" just to keep you guessing. It's unclear why Wobbuffet, as a species, feel like they have to do this. Most people just want them to stop, but hey, sometimes it's funny.

Not being one to break the mold within his species DNA, Wobbuffet is also an agreeable sycophant, which is why Blade Knight inc caught him in the first place. This makes a lot of sense, really, in that Blade Knight inc would love nothing more than to have someone agree with him on command whenever he raves about how cool and awesome he is. Back in Dream Land, Wobbuffet also acts as a secretary for Blade Knight Incorporated, the company, and handles most of the incoming correspondences as well as the paperwork. He attempts to put a positive spin on all the current goings on for the company, good or bad, to keep Blade Knight inc. from berating him. It may be too late, though, as over time, Blade Knight inc seems to become more increasingly annoyed with Wobbuffet's antics. That said, Wobbuffet actually enjoys corporate work, and is perfectly fine with being a salaryman, as it is the same life he had in Japan before he was captured.

His relationship with other Pokemon seems to be fair. He's not really close with anyone, but aside from his "WOOOOBBBBUFFET" pop in, he doesn't really get in the way, so people don't really mind him. Nidoqueen Nakamura, however, understands and appreciates his love for work, having also been a salarywoman in Japan as well. As a battle partner, Wobbuffet holds his own very well, being able to reflect all attacks back at the opponent helps him create something of a force field for his teammates in double or more battles. Bellsprout may not care for his pop ins, but he definitely gives him his due credit when it comes to battling, so long as Blade Knight inc calls the right move instead of the wrong one. 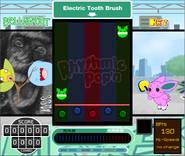 Wobbuffet's cameo in Rhythmic Pop'n
Add a photo to this gallery
Retrieved from "https://aquabunny.fandom.com/wiki/Wobbuffet_(Alternate_Universe)?oldid=1166"
Community content is available under CC-BY-SA unless otherwise noted.