WarioWare DIY: High-Functionality Aqua Bunny Pack
A mechanism designed purely for keeping time, Sprocket made its debut in Tile Gallery as the mascot character for the Time Attack mode. The origins of Sprocket, such as who created it or where it came from, are unknown. It has a friendly disposition and tries to be helpful, but it may go overboard with incessantly announcing the time, and the bells on its head are rather loud. Sprocket also appears to have time on the brain as well, as it is seen in Tile Gallery thinking about clocks and metronomes.

Sprocket also appears in WarioWare DIY: High-Functionality Aqua Bunny Pack in the micro game, Sprocket Says, where you wait until Sprocket sets off its alarm bells to reflexively react as fast as possible. 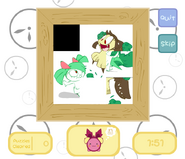