• So Long, Farewell, Until We Meet Again! (Canon)

• I've Got My Love to Keep Me Warm (Beyond the Series)

Shockette La'Vee is the 2nd born daughter of Evan and Bonnie La'Vee. She is also the middle child of the teenaged Eon Trio, and the second oldest of the Eevee Sisters overall. She is a major character from the Poke Island series. Though she makes her first appearance in Poke Tales, her character is rather shallow and doesn't gain much depth until Poke Legends. She continues to be a prominent character until the end of the series.

Shockette is the most playful of the Eon Trio, and also the most shameless and most outspoken. She's also the flirtiest, and all three of them are highly flirty individuals, making guys nervous for a laugh. She's a very cute Jolteon and she knows it. Sometimes she'll play up a "bad girl" image, since she pulls it off the best, but it's never for long as she won't be able to put aside her upbeat high spirits for too long, and often busts out laughing at the ridiculousness of it all. When messing with Joy, she tends to be the roughest, running around with her in her arms or spinning her around or giving her noogies, on and on. She would also give Joy really spotty advice, and it's hard to tell if she was joking or being serious. Shockette could be best described as a physical tsundere rather than an emotional one, as she doesn't characteristically show the signs of a tsundere, but still runs hot and cold in terms of energy levels. When she's hyper, she's wild just like electricity, but once that storm blows over, she's actually very down to earth and even introspective. She's also very sweet when she's calm, and during these moments tends to relate to Bubbles and Joy more. When she's energetic, however, she seems to relate to Rosie more. Like the rest of the Eon Trio, she's very high maintenance and into looking good, always wanting to stand out and be the best dressed (or at least best groomed) girl at any social gathering. She almost always wears silver earrings.

Shockette is quick to become defensive, either on her own behalf or on behalf or her sisters, and can be protective of her sisters as well, offering to throw down if it comes to it. She also downplays her emotions or feelings, and when annoyed just usually lets it go with "whatever", sometimes followed up with a snide comeback, or depending on the situation, "you're no fun at all". It would seem that Shockette is essentially trying to escape herself, and despite loving attention, doesn't like having the attention turned on her, if that makes sense. In Poké Tales, Shockette is really just a girly playful flirty physical tsundere, but in Poké Legends, it turns out that she seems to be at least somewhat depressed. When she gets into conversations with people she trusts, it turns out that she's essentially looking for acceptance, the kind that she lacked from her parents. It makes sense that she would hang around potential surrogate mothers like Nidoran or Nidorina, babysitting for them or attempting to make meals with them, even though she's a bit clumsy. However, the compliments that they give her warm her heart and, in a way, fill a void. Shockette, like the rest of her sisters, decided not to become a statistic to parental abuse, and instead vowed to rise above their situation in spite of their parents, going out of their way to accomplish their own dreams (if only to rub it in their face later), but Shockette seems to be the most lost of the three, because of her clumsiness. It is later learned that she's most interested in music, and is pursuing to be a singer just like Vulpix, and wants to start her own girl's rock band. However, this is proving to be a little difficult for the Jolteon. She won't give up, however. She's usually the most available of the Eon Trio, so it would seem that perhaps she's trying to get her paws into a little bit of everything, too.

During her most introspective moments, when she pours her heart out, she will often break down and begin to cry. She's really trying her hardest to do the best she can. By the end of the series, all four sisters are united and more in sync with each other, with a much stronger bond and love for another. Each of them has promised to back the other one, no matter what, and will be there to catch others when they fall, as well as offer opportunities when they succeed. The Eevee Sisters are gonna be, like, really amazing, so the world just better be ready for 'em, k? 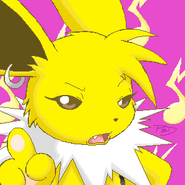 Art from 2007
Add a photo to this gallery
Retrieved from "https://aquabunny.fandom.com/wiki/Shockette_La%27Vee?oldid=1237"
Community content is available under CC-BY-SA unless otherwise noted.