Rhythmic Pop'n
Riri precedes the Chibi's Corner series by first appearing in fan art on the Creative Worlds website. She also appeared in media predating the series including a few animated gifs. As a character in the series proper, Riri is representative of an unyielding optimistic point of view in a world where other Chibimon have just stopped caring, or have problems of their own. She is very friendly and tries to cheer people up when she can. When she sees some of the ugliness in other Chibimon, however, or the many problems that occur in Dokio, she does not let any of it bother her, and just continues on with her day. Even if bad things happen directly to her, she just carries on, letting it roll off her back.

On her own, Riri very childish, and likes to play with toys and dolls, as well as board games with friends. Her favorite possession is Bunny, a raggedy rabbit doll that she's had with her since birth. She is also very imaginative, and likes to use her imagination to have fun all day long, making the most of the world she lives in. She enjoys playing with her cousin, Rey, most of all, but seems to get along swimmingly with Kali, Yami, Pichu, Wani and Marie as well. Her amiable personality allows her to get along with most of the other cast members as well, but they usually aren't as close. She likes to talk to BaBeat, wishing the planet well, but this isn't always a good idea. 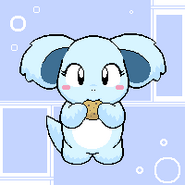 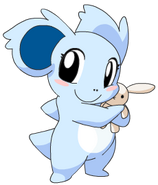 2012 art from the previous CHARACTER BIOS page on Aqua Bunny
Add a photo to this gallery
Retrieved from "https://aquabunny.fandom.com/wiki/Riri?oldid=1048"
Community content is available under CC-BY-SA unless otherwise noted.