Rey can be considered the male version of his cousin Riri, but a little less sunny and a little more brash. Like Riri, he also tries to help people where he can, and keeps an optimistic outlook on life. Afterall, it's easy for him as long as he's having fun, and to him, that's what life is all about. However, he's more prone to being impulsive than Riri, taking action before thinking things through. He's also prone to being sore when things don't go his way. However, he gets over it momentarily, and a lot of the bigger issues that seem to plague the planet don't really faze him, much like Riri.

Rey's favorite companion is Riri, having grown up closely with her, and they tend to do everything together. If there's one person he can count on to bring the fun to his day, it's his cousin Riri. His other friends are Kali, Pichu, Wani and Yami. Everyone else is typically fair-weather, depending on if he's on the other person's good side for the day or not. His imagination is just as active as Riri's, and he can usually make the best of a bad situation just by turning it into a game.

Rey is extremely shy around affectionate or otherwise flirty or cheeky girls who tend to flaunt their femininity. Although he does not dislike girls on principle, being around or in contact with these types of females tends to make him very uncomfortable and spoil the moment for him. Sustained exposure to the female over a long period of time will just ruin his day. 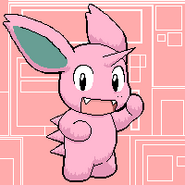 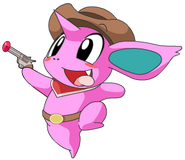 2012 art from the previous CHARACTER BIOS page on Aqua Bunny
Add a photo to this gallery
Retrieved from "https://aquabunny.fandom.com/wiki/Rey?oldid=1049"
Community content is available under CC-BY-SA unless otherwise noted.