Assassin's Final Showdown
Nidorino Eto is one of Kine's former top six Pokemon. He comes from the Alternate Universe series, and at conception, was an alternate reality version of Nidorino from Poke Tales.

Nidorino is a rather hopeless sort who wishes to be cooler than he actually is. The poor guy is nothing short of pathetic, but he tries his best. He comes from a sheltered lifestyle in the authoritative Eto household. His parents had very strict plans for him, but Nidorino – at that time a Nidoran – being meek, reserved and frankly unmotivated to live a life outside his bedroom walls, didn't live up to their expectations. Considering him a failure and a disgrace to the Eto name, they threw him out. Even today they still don't speak to each other.

Nidoran's rather frank lack of preparedness and a self imposed antisocial lifestyle (because home was so much more comfy after all) has left him soft, cowardly and gullible. Having no idea what a Pokeball was or who Pokemon Trainers were, he was easily duped into getting caught by Kine by thinking the Pokeball was either some kind of treat or some kind of toy. Nidoran's journey with Kine, however, may have been the best thing for him. He grew stronger, smarter, more social and less afraid, evolved into a Nidorino and experienced many of the things he has only seen on TV or the internet.

Today, Nidorino is one of Kine's strongest Pokemon in terms of physical power. Despite being out of shape, Nidorino's bulk makes him almost completely muscle, and collision based attacks have the potential to break bones. And this is without using the horn on his head. He's also skilled at being able to stockpile the toxins in his body into various projectile forms, seen in such moves like Sludge Bomb and Venoshock. Nidorino was released along with all of the rest of Kine's Pokemon, but he never left his house. Nidorino, in some ways, reverted back to his lifestyle as a child, and with other children to play with like a "cool uncle", it almost seems to have stunted him. However, there is hope for him yet.

Nidorino has role models in Kine and his friend Death Reaper JOE, but the one who inspires him to become a better person is Nidorina. Prior to dating Nidorina, Nidorino learned everything he thought he needed to know about women from anime, and not even the racy kind as he still knows nothing about the female anatomy. Before Nidorina, there were only two types: "Mom" and "babes", and even then that the latter never expanded beyond his own species save for a few exceptions (such as Bulba, who he admits is cute). However, Nidorino was never a player, either, so he would just ogle mainly Nido females from afar like a creep. Nidorino essentially learned to interact with women thanks to Nidorina, and successfully, his juvenile attitude towards women becomes undone day by day. Beyond this, Nidorina inspires Nidorino to do better. Nidorino has terrible luck, the kind of luck where it feels the world is actively trying to keep him down, but rather than give up and go back to comfortable mooching, Nidorino wants to become better for both himself and for Nidorina. A reoccuring bit in the series is Nidorina asking when the two of them are going to get married, and Nidorino always dodges the question or tries putting it off, but not because he's the uncommiting sort, but because he currently feels unworthy of having Nidorina as a wife, and wants to build himself up and get his act together first before popping the big question.

Overall, despite him being awkward, lazy and pathetic, people find themselves very attached to him, as he's a really likeable softie. In fact, it hurts even the most unsympathetic of people to see Nidorino suffer... even if Kine would never outwardly admit it.

The following is a list of recognized Pokemon moves that Nidorino can or has used: 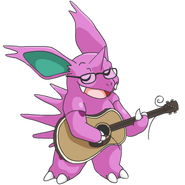 2009 art from the previous CHARACTER BIOS page on Aqua Bunny 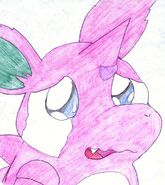 Prototype Nidorino later to be used in the early Alternate Universe (Poppistar Universe) series
Add a photo to this gallery
Retrieved from "https://aquabunny.fandom.com/wiki/Nidorino_Eto?oldid=899"
Community content is available under CC-BY-SA unless otherwise noted.