• So Long, Farewell, Until We Meet Again! (Canon)

• I've Got My Love to Keep Me Warm (Beyond the Series)

Nidoran is a major character from the Poke Island series, and appears in the first released episode of Poke Tales. Though his role was reduced in Poke Legends, he still remained an important character until the end of the series. 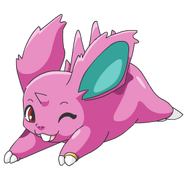 2009 art from the previous CHARACTER BIOS page on Aqua Bunny
Add a photo to this gallery
Retrieved from "https://aquabunny.fandom.com/wiki/Nidoran_(%E2%99%82)?oldid=660"
Community content is available under CC-BY-SA unless otherwise noted.