GIFT (Dumb Big Sister)
Nidoran "Didi" Schneider is the second born child of Arnie and Dori Schneider. Along with Oni, Andy, and Randy, she has made an appearance outside of the main series first due to delays in the comic. While there are enough details about her currently to get an idea of her character, there are still some unknowns, which will remain as such until her soon-to-come main series appearance.

She technically shared the same name as her older sister as long as they were both Nidoran. However, this wouldn't do in the household, so the parents gave them the nicknames Nini and Didi. Now that Nini has evolved, Nidoran Schneider refers only to Didi.

First off, let's establish that Didi is a dork. Her interests are geeky to be sure, and she follows a lot of fandoms, but she isn't particularly book smart. Above average intelligence with an interest in science like her older sister, Nini, but nowhere near a genius, and certainly too lazy to put in the mental effort.

That said, she is very artistic in a fine arts and composition sort of way, so she is currently pursuing an art degree. This makes her the first of her siblings to pursue higher education, although it is implied that their mother, Dori, also has a higher degree of education in the family. Her strengths are painting natural scenes on canvas, color theory, and abstraction. She is also good at painting murals and photography.

Didi is easily stimulated, especially by colors and bright lights. When she was around four, she really loved to play video games because it was such a grand visual and aural experience. In fact, it's hard to say that at that age, she was ever actually playing the game instead of just reacting to it. Though no where near as hype at her current age, she really loves rainbows and is always amazed at how such things naturally occur.

Sadly, Didi is lacking in self-awareness, and seems to be in the clouds without necessarily being completely off in space like Charlotte. This causes her to blurt things that she feels or thinks without much of a filter. It also makes her care less about her appearance than her sisters, a shirt with a chocolate stain is fair game if she's just going to get it dirtier anyway. Like Nidorino (and admittingly, Nidorina), she loves to stay in her underwear as long as possible. When she's not under dressed she's over dressed, trying to make a statement about individuality, or because she just really likes colors. If you can get her to stop being ornery, she does know a few things about geek fashion, at least, and can still make herself presentable. She also likes neon colored short shorts, thinking she's in LA for some reason.

She's also not very responsible, and tends to shirk responsibility to do the nearest fun thing, leaving Oni to pick up the slack. She avoids confrontation, a lot like her mother, because she doesn't know how to deal with it. This makes Didi seem chipper all the time, but sometimes she's actually avoiding things that bother her.

Overall, Didi takes after her older sister's fun loving personality, and then goes much further. She is also about as jokey as Nini, and doesn't mind making herself the butt of a joke either. However, it should be said that Didi isn't a bad person. Before leaving, Nini did a lot to pass down as many moral values as she could to her siblings, and even if some of them went over Didi's head (because all she could think about was playing), she retained a lot of it, and never does anything that would hurt herself or her family (emotionally or otherwise). But washing the dishes when cartoons are on? Forget about it.

Even in the present day, Didi's best friend is still her sister, Nini. She imprinted on Nini nearly after birth, and she loves Nini with all her heart. She'll glomp onto Nini when she gets a chance, and Nini being the affectionate soul that she is, is always one to reciprocate and even pay her back with a much stronger bear hug. As children, these two were inseparable and got into a lot of trouble. And while they didn't share all the same interests (Didi hates sports, Nini isn't really into "swords and sorcery" fantasy), they always encouraged each other to be true to themselves.

Finally, Didi is just plain cute, and has always been since childhood. She has a very youthful, sweet and sort of dweeby appearance with the most pinchable cheeks you've ever seen. The ones on her face, wise guy. 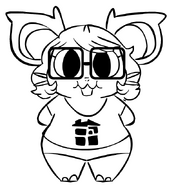 Would you say she's "adorkable"? 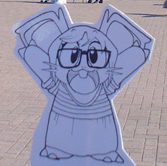 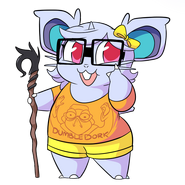 Older Didi image
Add a photo to this gallery
Retrieved from "https://aquabunny.fandom.com/wiki/Nidoran_%22Didi%22_Schneider?oldid=751"
Community content is available under CC-BY-SA unless otherwise noted.