Nidoqueen is Normal, Silly
Nidoqueen Nakamura is one of Kine's best former Pokemon, used as a powerful substitute to his main six. She comes from the Alternate Universe series.

Nidoqueen's role in the series has been quite small so far, but it is implied in universe that she has a strong connection with Kine, and that Kine holds her with very high regard. Despite it all happening off-screen, Nidoqueen was a powerhouse for Kine during the Johto adventure, and would typically be swapped in from storage to save the day when the going got tough. However, during that entire adventure, Nidoqueen mothered Kine as if he were one of her own, to which you could probably get him to admit that he simultaneously loved and hated.

Before Nidoqueen met Kine, however, NidoRAN was a salarywoman in Kyoto City, working towards moving up the corporate ladder but being held back because she wasn't seen as equal to the humans despite her degrees and certifications proving otherwise. When you're a small bucktoothed monster-bun, it's hard to be taken seriously, but it's likely that even if she were a Nidoqueen during that time in her life, that humans still wouldn't allow her to be anything more than a bottom tier employee. Nevertheless, she worked hard and diligently, keeping a record of all the positive changes and suggestions she made with the company to not only build her case, but to take with her as credentials for her next job should things remain unchanging with her current one. All of that would change in an instant when Nidoran decided on her own accord that she wanted to help Kine instead, possibly because she felt she was going nowhere as a salarywoman, but much more likely because she felt the poor child was incapable of taking care of himself. During the Johto adventure, Nidoran evolved into Nidorina and then shortly into Nidoqueen via Moonstone, which allowed Kine to have both a Nidorina and a Nidoqueen (which Nini absolutely refuses to evolve into) on his team.

In the series proper, we see how this relationship between them plays out in Nidoqueen's first appearance in Royally Screwed. Nidoqueen now works at a new job in Dream Land, continuing where she left off on Earth, but treated with much more respect now that she's in a world full of bizarre creatures instead of BEING the bizarre creature. It is shown that she clearly loves Kine a lot and treats him like a son. She doesn't seem to take Pokemon battling seriously and only does it both for fun and for Kine's sake, but she is very very strong nevertheless, and possibly the strongest in raw physical strength next to Miltank. Later on, she would begin to mother hen a lost Shuckle, and became very attached to it before it was revealed that the Shuckle belonged to Son of Nightmare. Even though she was upset with having to give up Shuckle, she gained foster custody of Sentret in the same day, which made the both of them very happy. Later into the series, she would gain custody of Vulpix as well via the made up technicalities the entire play-family within Kine's household abides by, but Nidoqueen is very pleased to care for Vulpix, too.

Nidoqueen is usually busy all the time and therefore is removed from the main group. She doesn't have much of a relationship with any of the characters aside from Kine, Sentret and Vulpix, and isn't really seen that often in the comics. Even so, Nidoqueen can be described as very polite and pleasing to be around. She is very respectful and honorable, and it's clear that a lot of it is cultural. She also loves to read books, and is not so secretly into things that are "kawaii", in her own words. That may be why she loves children so much, too. She has a collection of plushies, apparel, and items adorned with the faces of cute Japanese mascots. She also likes to listen to J-pop because of how cute she thinks it is, but doesn't tell anybody about this. 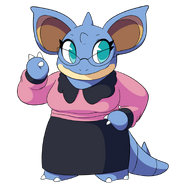 Older Nidoqueen image
Add a photo to this gallery
Retrieved from "https://aquabunny.fandom.com/wiki/Nidoqueen_Nakamura?oldid=1211"
Community content is available under CC-BY-SA unless otherwise noted.