Kent and Lisa
Lisa Berkley is the titular character of the semi-series Diary of Lisa Berkley. She made her first appearance in the animated gif, Wii, from 2006, and has since shown up on many occasions, mostly as a reoccurring Aqua Bunny character.

Lisa is the typical shy, quiet, and all around good kid who doesn't stand out and everyone forgets. She doesn't like to rock the boat, she just does what's she's told to do. She finds school a bore and doesn't like doing homework, but does it anyway as soon as she can just to get it over with. She's also asocial, so she doesn't exactly have personal interaction going for her, either. She works at a hardware store, part-time, just to make some extra money to spend on snacks, comics, movies and games. Having evolved into a Nidorina early on, her maturity rate slowed to accommodate the increased life span. Since her mentality hasn't exactly caught up to her age, she has a harder time relating to most other teens in her school. She doesn't have very many friends, but isn't bothered by this fact as long as she has her father, Kent, to keep her company.

In her home life, Lisa could be best described as a daddy's girl, as she is always happy to hang out with him when she can. Granted, there's several hundred years of generational difference between them, but that doesn't stop them from finding ways to connect. In fact, Lisa enjoys listening to the near endless amount of stories her dad has to tell, as he's experienced quite a lot! She also helps him around the house and even in home repair. And in a nice compromise, Kent will make an attempt to do something Lisa likes, such as play video games with her, even though he's absolutely no good at them, or with any type of technology.

Speaking of video games and technology, this is where Lisa really shines! Lisa could be considered a hardcore gamer, especially for her age. In fact, gaming is almost all she's ever done during past summer vacations. She's amazed a collection of consoles and games for each console, no matter how obscure or from what region. In fact, importing is more second nature to Lisa than eating. Lisa is the type of person who will keep playing a game until it is completed, no matter how long it takes, and often has to be reminded to eat (or dragged out of the room to do so). She can play a game on any machine, console, mobile or handheld device or cabinet, and is pretty much skilled at using all of them. In fact, she's even a pro at machine operated games, such as UFO catchers, and has actually emptied out machines with her skill. Keep in mind this is all because she doesn't do too much else with her time. When she's not playing video games she's watching cartoons, notably Adventure Time. And if she's not watching cartoons, she's on the internet reading fan fiction of her favorite game and cartoon series. And if it isn't reading fan fiction it's looking at memes and fan art. And if it isn't that it's participating in discussion boards about her favorite game and cartoon series. Needless to say, Lisa is almost always plugged in. Even if away from the house, she doesn't go too far without having at least three electronics on her and some earbuds. She only puts these aside if her father asks her to, as she tends to ignore everyone else other than her closest friend, Tuff.

This isn't to say that Lisa is totally unproductive. She has an ambition to be a game designer above all else, with a secondary passion in writing for comics. She does a lot of thumbnailing and sketching in plenty of drafting sketchbooks, more to set up a feeling and drive the story than to actually commit to a drawing. She also creates plenty of design documents for game ideas she has, and has them all saved in a directory she's had since she was six years old. The way she figures it, one of these days she may actually get a chance to actually create one of these games, and if she goes big, she'll never have to worry about a lack of ideas.

Lisa's tastes are definitely geeky, but are probably the equivalent of Western preferences to use Earth as an example. This contrasts with Tuff, whose tastes are decidedly more Eastern. When they travel to conventions together, the only thing they typically agree upon is the cosplay, but there's no animosity between them, and they still like to share and listen to each others interests. If working a booth at a convention, Tuff takes it far more seriously, and feels rejected if people don't buy from them. Lisa could personally take it or leave it. And when it comes to the two of them cosplaying, Lisa always goes for super cute and non revealing.

Having written all of this, it seems like Lisa would be pretty chill. She doesn't show a lot of extreme emotion, and instead her expressions tend to be a little understated. There are only really three times when Lisa's emotions register more than a two on a scale to ten: when she's experiencing joy (so laughing, and hanging out with Tuff or her father for example), when she's fangirling and acting in irrational excitement over her favorite series, or when she's being extremely competitive in video games and shouting at the screen or other player (or conversely squealing in delight if she's coming out on top). 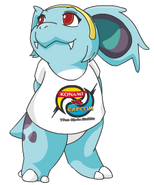 2009 art from the previous CHARACTER BIOS page on Aqua Bunny
Add a photo to this gallery
Retrieved from "https://aquabunny.fandom.com/wiki/Lisa_Berkley?oldid=758"
Community content is available under CC-BY-SA unless otherwise noted.