Somewhere in the American Midwest

GIFT (Dumb Big Sister)
Dori Schneider (née Clough) is the wife of Arnie Schneider and a work-from-home mother of eight children. She works in the health care industry, typically doing her work via phone calls and online, and is also involved in midwifery.

Dori is sort of awkward as far as mothers go. Her intentions are always well, but she seems to go over the top with her maternity, being extremely doting towards all of her children, even her grown ones. She doesn't seem to recognize when she's embarrassing her own children, but she tries her best to be a good mom to her children. She has a strange sense of humor, almost dorky and pretty corny, and she can also appreciate humor in most of its forms, as well.

By and large, Dori is a pushover. She gives in to her children often and does not want to make them upset. She has a hard time taking disciplinary action against her children. On the other side of things, though, she is very warm and loving to them. All of her children love her and actually respect her (even if they sometimes take advantage of her), because both she and Arnie passed down the affectionate love they have for their family and each other onto the kids. The children more or less turned out okay, thanks to Pop-Pop (and at times Nini) playing an active disciplinary role, while the parents provided all the love and emotional support.

Dori has a mild form of agoraphobia, and displays social anxiety in the form of avoiding embarrassment or social discomfort. This causes Dori to avoid whatever is troubling her more often than not, and to try to lighten the situation, she often falls back on a rather nervous laugh. She also avoids confrontation as much as possible and would rather go out of her way to please others if it means staying in her comfort zone. However, there are times where she can overcome her anxiety long enough to stand up for her family, or say something heartfelt, and these are things that come pretty hard to Dori to say or do.

Dori is also a sentimentalist, and likes to collect things and engage in activities that will provide memories for years to come. She is into scrap booking and loves family vacations. On these vacations, she tends to buy a lot of souvenirs, as they serve as reminders of the time spent with her husband and children. She also likes to participate in all sorts of tourist attractions, just to check off some imaginary itinerary in her mind of things to experience, making her very eager to travel. And when it comes to photos, not only does she love taking them, but she loves being in them, too. Family videos are even better! 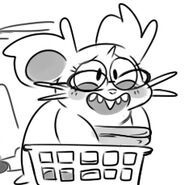 A flustered Dori as seen in the Dumb Big Sister comic PRANKS
Add a photo to this gallery
Retrieved from "https://aquabunny.fandom.com/wiki/Dori_Schneider?oldid=1108"
Community content is available under CC-BY-SA unless otherwise noted.