Somewhere on the American East Coast

GIFT (Dumb Big Sister)
Arnie Schneider is the husband of Dori Schneider and the father of eight children. He is also self employed at Schneider Smokehouse and Charcuterie as well as Schneider Gourmet, both of which are jobs he can do from the kitchen as well as outdoors.

Arnie has always been a very meek, tender, and kind hearted individual with a near endless amount of patience. Growing up, however, he was always the soft one in the family and in the neighborhood, usually tending towards engaging in what would be considered more feminine activities such as cooking, baking and sewing. This made him an oddball among his brothers, and also drew scorn from his father, Elijah (known more affectionately as Pop-Pop to the grandkids). Elijah would often try to "correct" this behavior by trying to get Arnie involved in activities that would be considered more masculine, including sports and joining the Pokemon Scouts of America (which he enjoyed but for all the wrong reasons in Elijah's mind).

Eventually, Elijah would move his family westward in an effort to get the family to become more self sufficient and rugged. This still didn't have the desired effect on Arnie, as he would eventually meet Dori, and they'd become sweethearts for many years before finally marrying. Arnie's affection towards Dori was typically shown in his culinary talents, which Dori very much appreciated, encouraged, and helped blossom into the fine cuisine chef that he is today. Elijah, while still ultimately disappointed with how Arnie turned out, decided that if he couldn't beat them, he would join them, and is the primary hunter for Schneider Smokehouse and Charcuterie.

Like Dori, Arnie is a softie and therefore a pushover, allowing his kids to walk all over him. He doesn't really take disciplinary action against his children, mostly because he just doesn't know how, and let's his own feelings get in the way. However, his children still love him very much for being a very active part of their lives, and despite taking advantage of him on occasions, try not to disappoint him. The Schneider family has a very strong support network based on love alone, thanks to the efforts of Arnie and Dori, and this impresses Elijah who believes that raising kids this way, and successfully, shouldn't even be possible.

Arnie is very eccentric about cooking, and really gets involved. In fact, cooking is like a game to him, and he's always going out of his way to create and experiment to come up with the most impressive and tastiest meals out of what little resources he has. His claim to fame within the family and even beyond, are his signature sausages. He always grills gourmet, infused sausage at family barbecues, and it's the one thing his kids will eat without question. The entire family now has an affinity for hot dogs and sausages because of Arnie's expertise. 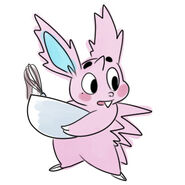 Arnie as seen in the Dumb Big Sister comic STIMULATION
Add a photo to this gallery
Retrieved from "https://aquabunny.fandom.com/wiki/Arnie_Schneider?oldid=1107"
Community content is available under CC-BY-SA unless otherwise noted.